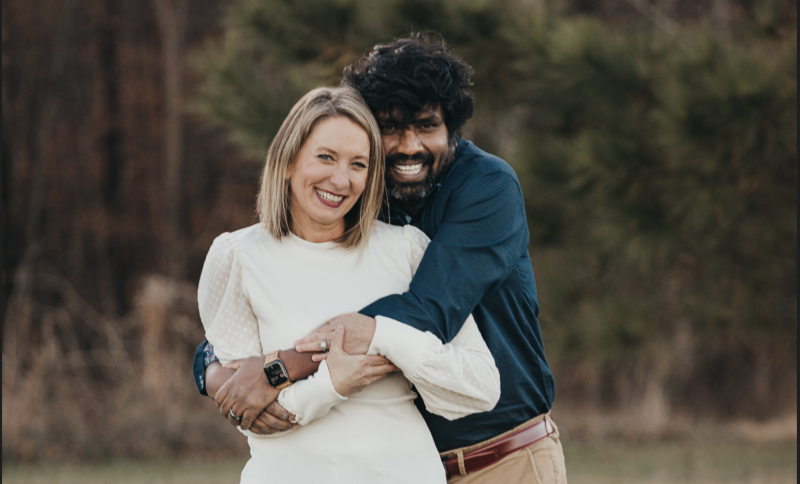 Since Ravi’s radical salvation he has been uniquely gifted to hear the audible voice of God, whom Ravi affectionately calls Daddy. This gift has allowed Ravi to make remarkable impacts around the world in various spheres from witch doctors to world leaders. This journey of obedience has opened doors for incredible opportunities not only to serve the physical needs of the broken and needy but also to impart healing, hope, and destiny to people around the world. Radical Transformation is the message imparted to Ravi during a time of personal turmoil.  In an extended season of encounters with God, he not only stepped into personal restoration but into a profound understanding of how hurt is formed.  With this understanding, Ravi was able to learn how healing can be released to a person’s behaviors, emotions, memories, and spiritual authority.

Ravi married his wife Julie and together in 2004 founded Kingdom Foundations. Both share a passion to see the love of Christ to encounter those living in darkness with tangible expressions of love and freedom. Currently, they reside with their four biological children in Lawrenceville, GA where they minister truth and destiny through God’s word. Separated by the ocean, but united as a family, their eight Indian, adult, adopted children reside in India.

In recent years, RT4 has been the focus of KFS. This transition with RT4 has only renewed their passion for the lost. They have found RT4 to be a powerful tool to connect people to Jesus in true freedom.

After a transforming encounter with God in 1997, Jackie Koller realized the true reality of a loving God. Shortly after this, she stepped into a missionary calling with abandon to serve and follow the leading of the Lord. For the past 20 years, Jackie has traveled the world preaching and declaring the word of God while watching its power change the lives of people and their communities. She has given her life to see nations transformed by the love and grace of a powerful God. In her service, she partnered with several ministries including, YWAM, Randy Clark’s Global Awakening, and Kingdom Foundations where she currently serves full time as CEO in Atlanta, Georgia.

In 2009, Tiffany experienced the Lord in a way that was more real and tangible than anything she had every known.  Upon meeting the Lord, Tiffany made it her mission to say “yes” to walk by faith into the impossibilities that display God’s glory.  Choosing to lay down her life, she left the career path that she had set out upon and moved to India.  Tiffany spent 4 years doing ministry and building a family before the Lord again asked her to embark on a journey in the United States.  In 2015, she and her family moved to America with the vision of seeing God pour out His Spirit on the church, calling it into a radical belief that sees people living unhindered, unashamed, and fearless in the face of opposition.  It is her desire to see the people of God know their Father in such a personal way that they are willing to fully surrender their lives and hearts into the hands of a trustworthy God as they step into the impossible and become conduits that display His glory.
Tiffany and her husband John met in Bangalore, India in 2012.  They married in 2013 and welcomed their two young children, Meela and Remi in the years following.  She and her family currently live in Atlanta, GA where she serves as the COO of Kingdom foundations.  Along with her commitment to ministry, Tiffany balances her time as a stay at home mom and business owner.

Linda and Mark loved being a part of, and serving, the local church for over 20 years. Linda recently retired after 10 years of pastoring. They are passionate about seeing God’s people using their gifts to advance the Kingdom of God and are now stepping into the destiny God has marked out for them.

In 2010 Linda met Ravi Kandal. Ravi called her out of a crowd at a conference and shared that God had showed her to him in a dream. He prophesied that the Lord was going to use her to train up missionaries (a person undertaking a mission; especially a mission or call from the Lord; basically everyone because everyone is created for God’s purposes!). Eight years later the Lord reconnected them and Ravi invited Mark and Linda to be a part of his ministry team on a mission trip to England. The Lord literally shook the ground beneath Linda’s feet there and told her that He was breaking new ground and was calling her and Mark to step out into the deep water with Him. Out of obedience to His voice, they are stepping out of their comfort zones of their full time jobs (Mark in 2020) and joined the Kingdom Foundations team. They are excited to open the first Radical Transformation 4 Center – House of Healing. They are raising up a team to help others connect with Jesus; get trained, encouraged, healed and equipped to fulfill the destiny and calling of God on their life.

Mark and Linda have been married for 31 years. They have 3 adult children who live in Minnesota and 2 beautiful grandchildren. Mark is an avid farmer. They love going to their lake-side cabin to refresh and recharge.

For twelve years, Keith and Jessica Roy have set a palatial table for clients of a retreat center nestled high in the Colorado Rockies. Recognizing the impact of hospitality to create space for people to encounter God, they are passionate about partnering with Holy Spirit to facilitate encounters with Him. Keith and Jessica host retreats, conferences and are the founders of RT4 House of Healing in Colorado Springs. Keith has a B.A. in Christian Ministries and Jessica holds a B.S. in Early Childhood Education.

Keith is a reconciler who thrives facilitating restoration back into the body of Christ for people wounded. He sees bodies healed and hearts restored through an outpouring of Holy Spirit. Jessica walks women through life, calling them higher than their circumstances or histories into their God-given destiny. She is a prophetic worship intercessor who engages Holy Spirit to bring breakthrough for family, friends and clients. Together Keith and Jessica enjoy adventuring through the western states with their family of four.

With the leading of the Lord, in a time of personal need, Ravi Kandal encountered radical transformation. This brought about a complete shift for him personally. Now, marked with new found freedom, he understood this experience was not just for him. He had a message to help bring freedom to others. This season extended into three years of development producing what is now the RT4 coaching process. Rt4 has been a life changing experience for many.

Susan has been a follower and lover of Jesus for over 35 years. She was a senior level corporate executive for over 25 years and had extensive experience leading, training, coaching, and mentoring individuals and teams but was looking to make a greater impact and find a way to give back. Since that time, she has been on a journey and focused on helping others find freedom through coaching, training and imparting and became a certified coach, trainer, and speaker through The John Maxwell Team. Around this time, she met Ravi and experienced Radical Transformation 4 personally and was freed from memories and emotions that had unknowingly affected her behavior. This radical change led her to take her coaching into a new direction. She has become an RT4 coach and is seeing lives transformed and people finding freedom, hope, and direction for their future. This was the answer she was looking for; a proven coaching method helping to bring transformation and releasing people into their God-given potential and destiny. A Message From Susan

Holly-Rae Grams became a committed follower of Jesus at 17 years old and from that time her heart has burned for the nations. She began ministry with Youth with a Mission (YWAM) in India, Nepal, South Korea, and Mongolia. Her passion is to see people encounter Christ for healing. She loves partnering with Jesus to see healing miracles through prayer and counsel. This passion led her to obtain degrees in sociology, counseling and healthcare in order to better serve others.  Through her many years of ministry, she has worked closely with those in need counseling missionaries, leading 10 step programs helping those suffering from addictions and abuse, and working as a house parent guiding marginalized youth with the counsel of peace and love. As Holly Rae encountered for herself the personal transformation and development of RT4 she was inspired to become an RT4 coach. Since then she has coached people into the same life changing experience, helping others encounter Christ’s power. She currently serves the homeless at Isaiah’s Rock in CA.